On June 5, 2012, The Worthington Board of Education voted to send 3 levy options to the Franklin County Auditor for certification. The three options are:

All costs are calculated based on the average house value in Worthington of $234,000.

The first topic in any levy discussion is whether or not a levy is justified or whether it is possible to live within the confines of current revenue. Our treasurer will point out, correctly, that total revenues in FY13, the last year which can be forecasted with any accuracy given the vagaries of the state budget, are all of 3% higher than total revenues in FY08. The primary reason why is the loss of TPP reimbursements which, while anticipated, are still sizable. Whether the phase out continues past FY13 is the subject of some debate, but the phase out that has already occurred does partially justify a levy in 2012. Again turning to the forecast, we see an increase in expenditures of approximately 10.4% from FY08 to FY12. This works out to a 2.6% annualized increase during a period where inflation, while benign, was still around 1.75 and given the rapid increase in health care costs, that difference is certainly understandable. In the period from FY12 to FY16, the treasurer forecasts a total expenditure increase of 10.9%, an average of 2.72% while forecasting a revenue decrease at the same time. The revenue decrease is by no means certain, but I agree with the treasurer that it is more likely to happen than not. Given this dynamic, there is clearly a mathematical case that can be made for the levy.

By what process should a board of education come up with a levy amount? As a student of this process in Worthington and throughout the state, the methodology varies depending on local circumstances. In Worthington, for at least the last 11 years and inclusive of the levy cycles of 2001, 2004, 2006 and 2009, the methodology employed would be to calculate how long you wanted the levy to last (FY16 in this case), take the deficit at the end of that period (17,000,000 in this case), add a fudge factor, divide by how much a mill raises (1.7 million in this case) and finally, divide by the number of years of collection (3.5 in this case). The only real variable in this calculation has been the size of the fudge factor, so let’s talk about that. In math terms:


The fudge factor, known in financial circles as the cash balance reserve is the amount of cash you want to have available at all times for emergencies and to carry over into the next cycle. The policies vary widely, even in Central Ohio. Our friends in Hilliard, for example, have a board policy indicating a minimum of 10%. The Ohio Association of School Business Officials says a minimum of 60 days is justified. The GFOA concurs, saying 5 to 15% or 1 to 2 months should be sufficient. Dublin City Schools, in their recent decision to run a 6.94 mill operating levy is apparently content, according to the Columbus Dispatch, with a cash reserve of 3.4 million dollars at the end of the forecast period, or a little under 2%. Westerville’s stated policy is 30 days, or 8.2% (Page 32 of the link).


As we analyze the levy recommendations from our administration, it soon becomes clear that the only thing really under discussion, at least as far as the operating levy goes, is the size of the cash balance at the end of the levy period, which is FY16. The calculation is not difficult: 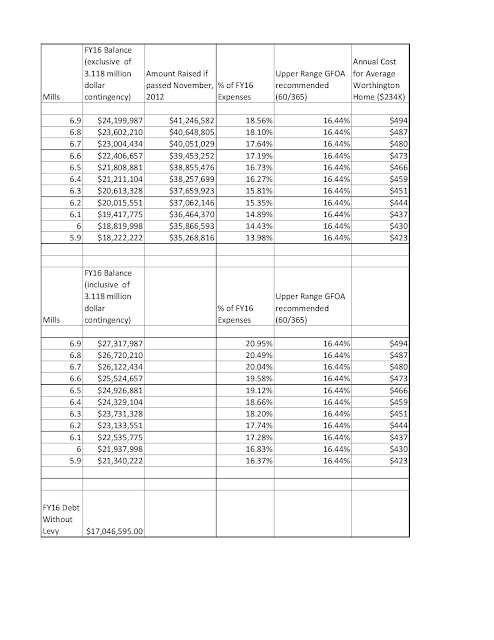 The GFOA recommendation is inclusive of a number of risk factors that wouldn’t necessarily apply to us. For example, a successful levy would include bond money, therefore, we would be protected from such exogenous events as roof repairs, blown boilers, buses failing and so forth. There are only a few events that would materially and negatively change the forecast.  The three events that can be game changers are – a really bad state budget that phases out TPP and/or foundation at a rate exceeding that projected in the forecast, a negotiated agreement with significantly higher increases than suggested by the forecast or an outflow of kids to charter schools should the legislature implement something like the original version of HB136. All of these events are possible, none are likely.

So let’s apply all this to the levy decision. While we haven't received a lot of input, the input we have received suggests taking as little as possible. Absent some kind of incremental levy, a 5.9 mill levy is the lowest amount that keeps us within GFOA guidelines in FY16, the end of the levy cycle. Plugging those numbers into our formula, we have:


The Treasurer's case for 6.9 mills has to do with our policy of "Reasonable Levys at Reasonable Intervals", the concept that our school district should be on a planned levy cycle. A planned levy cycle makes sense when you consider that school districts are flat funded (e.g. no incremental revenue) absent a new levy, unlike cities and states whose revenue is partially dependent on the income tax which will be a function of the economy. His argument is that if we go with 6.9 mills now, the next levy, in 2015, won't have to be higher than what Worthington is generally comfortable with, below 7 mills. I respectfully disagree. To take money from people who are living paycheck to paycheck (or don't have a paycheck) so that Worthington Schools can build up cash balances in excess of even what the GFOA would recommend and with a goal towards softening the next levy in 2015 seems like bad public policy to me. History demonstrates that the last 2 years of the five year forecast are difficult to project with accuracy, so to treat those assumptions as gospel and levy our residents based on that seems wrong. A 5.9 mill levy should leave our district with an appropriate safety net.